Dilijan is the largest town of Tavush region. Dilijan developed as a resort place, where the rich families of Transcaucasia used to spend their summer holidays. The first hospitals and sanatoria were built in the beginning of the last century. Sometime later there were built industrial companies (the factory of instrument making-“Impulse”), educational and cultural institutions. Now Dilijan is known as a mountain-climatic resort, it is also an important industrial center. Dilijan will likely become a town with centralization of banks in coming years.

Ijevan is the regional center and the second town of Tavush. Ijevan is comparatively younger as a habitat. It was founded at the end of the 18th century near a mineral source and got the name Carvansara then it was renamed to Ijevan in 1920 and later got a status of a town. Now Ijevan is a well known industrial and cultural center. The large carpet making factory and woodworking conglomerate are very famous as well as the machine-building plant and companies of food and light industry. Here also functions the branch of Yerevan State University.

Noyemberyan and Berd are the two other towns of this region.

The sites of Tavush region:

Goshavank (Nor Getik) monastic complex is one of the famous spiritual, educational and cultural centers of the XII-XIII centuries situated on the bank of the stream of the river Getik in the village Gosh. Instead of the monastery Getik which was destroyed by the earthquake, in 1188 by the help of the lord Ivane Zakaryan the famous Mkhitar Gosh founded Nor Getik (transl. new Getik). After the death of Gosh (1213) it was renamed Goshavank after Mkhitar Gosh.

Khachkars and cemeteries are the components of the complex, among them 3 “embroidered” khachkars of the master Poghos (one of the two khachkars near the western façade of the chapel St. Gregory the Illuminator was moved to the State Museum of History of Armenia in 1935). According to the record one of the khachkars was created in 1291. The wife of the lord Vakhtang from Haterk, Arzunkhatun and her daughters crocheted a curtain with the pictures of the Savior and saints and donated it to the monastery. According to Kirakos Gandzaketsi everybody who saw that curtain gave their blessing to God that he endowed the women with “the talent of web spinning and drawing”. The unique curtain of the vestry was made from very soft goat fluff. Devout Arzunkhatun made curtains and covers not only for Nor Getik but also for the churches of Haghpat, Makaravank and Dadivank as, according to Gandzaketsi,-“she loved churches too much”. The monastery of Deghdznout is located in the backwoods, 15km to the south-east from the village Kirants (Getashen). The monatic complex consists of the church, gavit and chapel. Around it there are ruins of an old habitat and a cemetery. The church is built from dark pink polished tufa and has a plan of “domed hall”. On the both sides of the abside there are double-floor pawnshops, the entries of which are from the vestry. The walls are covered with rich wall-arcade from outside. The gavit is built from the same stone and has almost a quadratic plan. It belongs to the gavits of centralized, leaning upon the crossed arks type and has records of the XIII century.

The monastic complex Haghartsin is located in the historical province of Dzorapor (18km to the north from nowadays town Dilijan of Tavush region). The scientific center of Haghartsin is mentioned among the leading cultural centers of the XIII centuries (Kostandin II from Bardzraberd, Stepanos Orbelyan). Haghartsin started to flourish in 30-es of the XIII century in the ruling period of Khachatur Tarontsi. Before that the monastery was desolated for a long time.

The complex was formed from the buildings built in different period of times. It has 3 churches, 2 gavits (one is destroyed), a sitting hall; several praying halls, khachkars and so on. St. Gregory (X cent.) church is the oldest, which is a crosswise domed building with pawnshops in the four corners. The big gavit with 4 columns in the west part was built by Ivane Zakaryan in the end of the XII century. By the southern wall there are reserved the ruins of tombs. There is another domed church of St. Stepanos to the east from the complex, which was built in 1244.

The main St, Astvatsatsin church is a domed hall. The dining hall is in the west which was built in 1248 according to the construction record of the south-western entrance. It is the one of the two buildings of the same type (the other one is in Haghpat). It is a long size hall by its plan. In the territory of the monastery there are several praying halls located on the slopes of the rocks. The bronze cauldron which was found in Haghartsin and weighed 350kg is a highly artistic model of metallurgy. The engraving of the cauldron’s brink mentions the date of its making-1232. Its four handles are statues of lions, the legs of which are also decorated.

The monastic complex of Makaravank with the originality, richness and differences of its ornaments is ranked among Akhtamar, Bgheno Noravank and Gandzasar, taking an important place in the Armenian architecture.

There is a legend about Makaravank, according to which the monastery was built by one master called Makar and his son. His son used to polish and ornament the stones and his father built the walls. The walls of the monastery were rising little by little and master Makar was cut off from the ground. He used to spend the nights on the incomplete walls of the monastery until he finished the building. One day master Makar noticed that the stones were not in line with each other and the ornaments also were not the same as before. He asked what had happened to his son. They answered that his son was ill. Makar understood that his son was dead and he threw himself from the top of the monastery and dead. The master was buried under the wall of the monastery, which was called Makaravank.According to the record of the khachkar located in the south the main church was built in 1205. The second church of Makaravank (X-XI centuries) is in the north-east of the complex.

The medieval monastic complex Jukhtak is situated on the slopes of an afforested mountain, 3km to the north-west from Dilijan. In the lithographic sources it is mentioned as the monastery of Petros or Gisheravank. The complex consists of two separate churches (the name “Jukhtak” comes from the word “jukht” which means “a pair”) the western of which St. Astvatsatsin, according to the record of the entrance, was built in 1201 by the efforts of the prelate Hayrapet. It is rich of lithographic records (the record of the western window mentions the name of master Sargis as its builder). On the both sides of the entrance there are khachkars decorated with sculptures.

The second church of St. Grigor of Jukhtak monastery is a domed hall (the lower part of the cylindrical drum of the cupola is preserved) on the both sides of which there are double –floor pawnshops. There are no any data referring to the date of construction. According to the construction records of St. Astvatsatsin church it is considered that at the time of its construction St. Grigor church was already built. The both churches are built from light yellow polished stone. St. Grigor church was repaired in 1973-1977.

This medieval Armenian monastery is located in the place called Khachi Tak, 3km to the south from the village Aygehovit on a high slope of an afforested lawn. It was built in the 13th century.

The monastic complex of Srvegh consists of the following parts:

The lake of Gosh is situated in the lap of amazing forests, 2,2km to the south-west from the village Gosh. It was formed in the result of the land-slides. The surface mirror of the lake is 0,008km2, the length is 100m and the width is 80m. The maximum depth of the lake is 8m; the volume of the water is 1500m3. It is fed by the sources and atmospheric precipitations. The water temperature in summer rises only to 14°C. 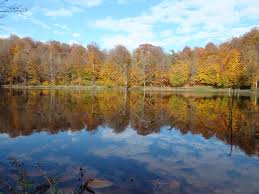 Matosavank is located in the forests of Dilijan on the right bank of the river Bldan. The complex is formed from three buildings adjacent to each other: a small church, gavit and a writing hall in the south. The medieval cemetery is spread in the south-east from the monastery. According to the record the church was built in 1247. Under the northern wall of the church there is a khachkar with a rich decoration and a record of 1251. There are many high-artistic khachkars on the inside wall of the church.