The oldest leather shoe in the world was found in the territory of Areni cave located in the region of Vayots Dzor in 2008. The shoe is about 5500 years old. Such kind of shoes was used by the natives of Ireland about 50 years ago. The shoe was made in 3500 BC in the Neolithic or copper-stone age. When the shoe was found it was filled with dry grass, which purpose isn’t clear to the scientists. The size of the shoe is 37 by Europe. It is already moved to the museum of History of Armenia and needs preservation.

All the three towns of the region –Yeghegnadzor, Jermuk and Vayk are small. The regional center Yeghagnadzor is one of the ancient habitats of the historical Syunik. It was the residence of different Armenian lord houses. At the time of joining to Russia it was a small village which developed at the expense of the Armenian families emigrated from Persia. Its development was noticeable after 1931, when it became the center of the administrative area.

The town Jermuk has a unique role in the region as a first-class health resort. Thousands of Armenians and foreigners have their rest and restore their health in the sanatoria of Jermuk every year. Here is produced the famous mineral water “Jermuk” which is delivered to different countries of the world.

The sites of Vayots Dzor region:

Areni is an old and famous village of Vayots Dzor. It is a road junction and a military point closing the gorge from Sharur valley to Vayots Dzor. In the ancient times Areni was located 0,5km to the north from the nowadays village, on a hill where the church of St. Astvatsatsin built in 1321 by the architect Momik is steadfast up to now.

This medieval church complex is situated in the west of Gndevaz village. It was built in 931-938 by the help of the lord Smbat’s wife Sopi (Sophia). She was the daughter of the great lord Grigor III Derenik and the sister of the king Gagik. The princess was known by her constructional activities. Generally, Christian Armenian women, especially princesses and queens, used to build churches and monasteries in order to keep burning the belief of the Armenian nation.

St. Stepanos church was built in 931-936 from the polished basalt. It has four vestries and a crosswise, centered-cupola type plan. The inside of the church was ornamented with murals by the priest Yeghishe, among which the murals of Christ were preserved on the wall of the vestry. There are high-reliefs of the four evangelists inside the church on the columns of the cupola. The western gavit of the church was built by the priest Christapor in 999. There two rooms located along the northern wall of the church, the western of which used to be a writing-hall. Noravank is situated on an inaccessible hill of a deep gorge, 3km to the north-east from the village Amagha. According to Stepanos Orbelyan it has been a sacred place still from the ancient times. St. Pakos church has been known since that period of time, the church was located in the place of the nowadays monastery. There flew a source from the bottom of its stage which had a healing quality. The main church of the complex is the tomb-church St. Astvatsatsin (1339) of the lord Burtel.

In the 17-18 centuries Noravank was surrounded by a wall. There are many khachkars in the territory of the complex among which the works of the miniature painter, architect and sculptor Momik are distinguished by their high artistic value. Here is the khachkar erected in the memory of Momik.

The caravanserai of Selim was built in 1332 during the reign of Chessar Orbelyan and it is situated on the southern slope of the mountain pass of Selim (2410m). Its length is 35,5m. The building is built from the polished basalt. The roof is covered with tiles and slabs, which mentions the skill of the architect. The building belongs to the basilica type ones. 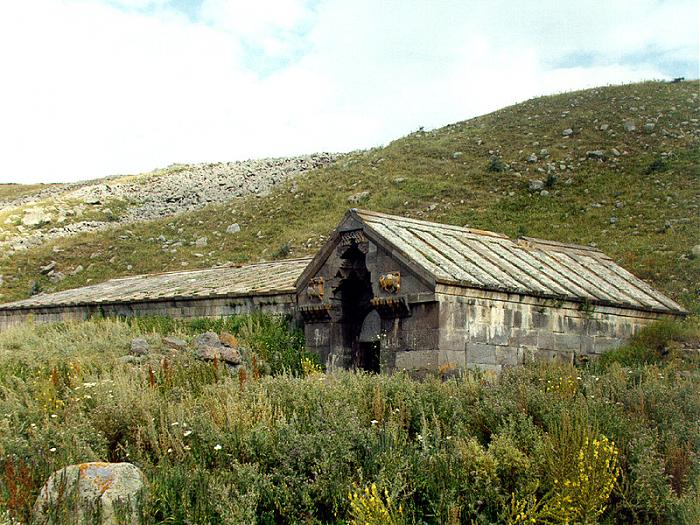 The protective complex Smbataberd (the fortress of Tsaghats Kar) is located in the east from the village Artabuynk of Vayots Dzor region. There are preserved historical nformation about the bloody battle between the Armenians and Persians near the fortress in the V century. It has high and wide (2-3m) pyramidal walls (built from big basalt stones and lime-mix) and protected by the deep gorges of Artabuni and Yeghegis. The northern, general one of the three entrances and the eastern one are halls covered by the tiles and built from the polished basalt; on the roof there are guardrooms and watch-towers. The fortress is divided into the northern and southern parts by a wall on which there the ruins of the citadel, dwelling buildings and swimming pools are preserved. The water was brought from the sources located near the monastery of Tsaghats Kar.

The monastery is in 7km to the north from Vernashen village. It is formed from the church, gavit, belfry and the walls surrounding the complex. The territory is divided by the deep gorges and the ruins of the fortress Boloraberd are preserved on the top of the nearest ridge. In the ancient times the monasteries Spitakavor, St. Khach of Arkazi and Tanade were connected by the signals of fire light and used to transfer information to each other again by the help of the fire. A lot of flowers bloom around the monastery in spring and among them the monastery itself like a flower, that’s why the people call Spitakavor also the monastery of Tsaghik (flower).

The cave of Mozrov is on the right side of the road taking to the village Mozrov. It was found during the road-building works. Its depth is more than 300m. Many stones stick out in the huge rooms from up and down. The waterfall of Jermuk (mermaid’s hair) has a height of 72m. Falling into the river Arpa it reminds hair of a girl, creating a very beautiful site. It is one of the wonders of Jermuk about which people made up legends. The name of the waterfall also isn’t casual.

In the ancient times on the top of the cliffs there was a fortress of a strong lord. The lord had a very beautiful daughter and there were suitors of her hand from all over the world. The girl refused to everybody as she loved the young, brave and beautiful son of the herdsman. Every night she used to throw a long rope to the gorge by which her lover climbed up to her room. But soon the lord found the rope in her room and guessed everything. He got angry and damned her saying, “If you meet the son of the herdsman again become a mermaid and don’t come out from water”. But nothing could keep away the lovers from each other. In order to help her lover to climb up to the castle the girl threw to the gorge her hair instead of the rope, and immediately at that time the severe damnation of her father came true and she become a mermaid and her beautiful hair became a wonderful waterfall, which people call “Hair of a mermaid”. 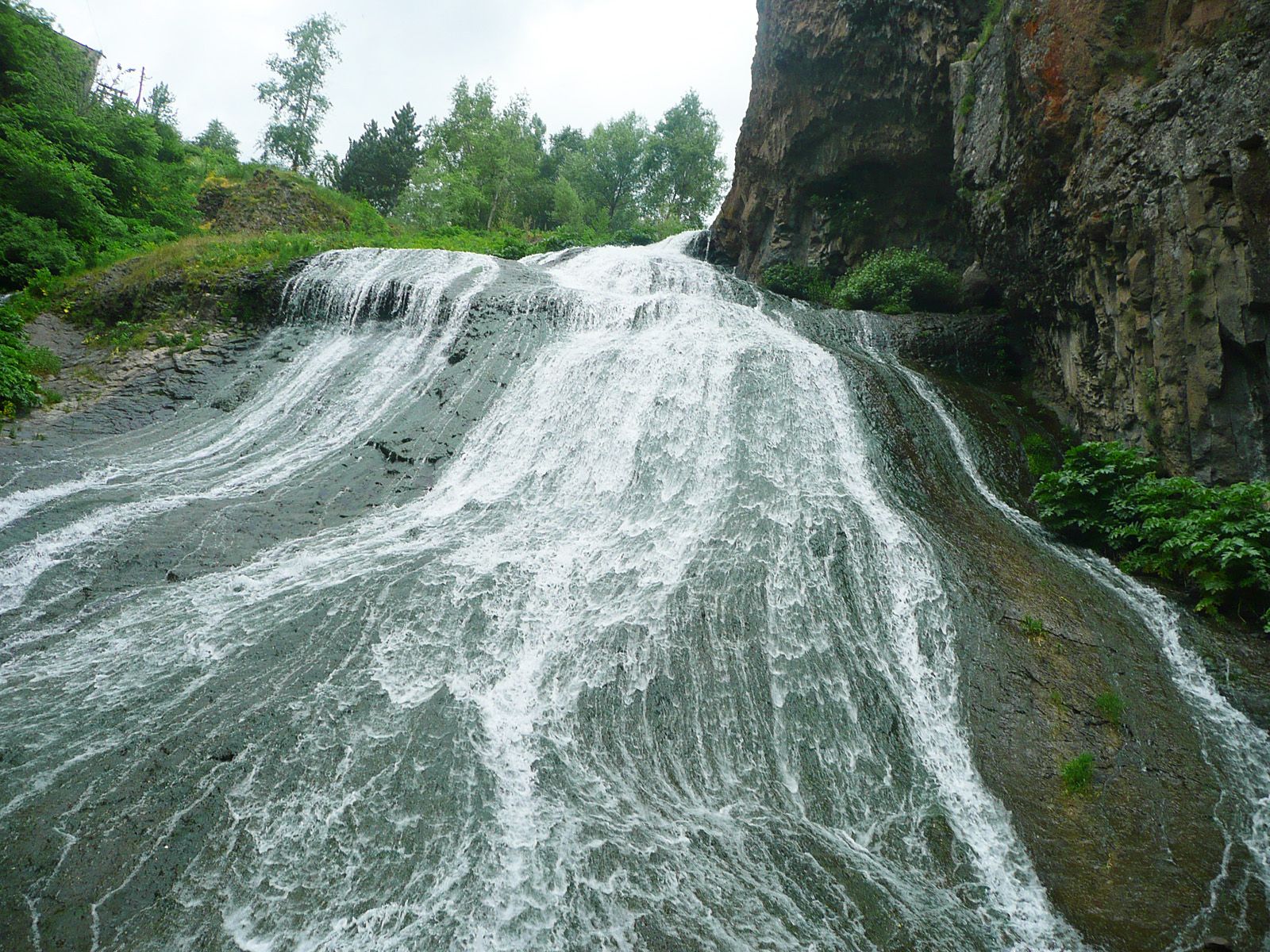