Syunik region borders with Iran in the west (in Nakhijevan) and Karabakh in the east and with the region of Vayots Dzor in the north. Syunik is the first among the regions of Armenia by the size of its mainland territory. Formerly the ninth state of Greater Armenia was called Syunik (Sisakan). The present Syunik region occupies only a part of the historical Syunik.

Syunik is the most mountainous region of the Republic of Armenia. The height difference between the highest (the pick of Kaputjugh-3906m) and the lowest (in the gorge of Meghri-375m) points is about 3500m and it is more than in another region of RA. Vorotan, Voghji and Meghriget are the famous rivers. Vorotan is the biggest river of Zangezur. The gorge of Vorotan is also well known, the depth of which is about 800m and here the river passes under the Devil’s bridge created by the nature. A picturesque waterfall Shaki was formed on the stream of Vorotan with the same name. The mineral sources of Tatev, Kajaran, Goris, Vorotan (Urut) and many others are very famous.

The towns of Syunik region are:

Kapan is the regional center of Syunik. It is situated in the south-east of the country on the elevation of 800m. It is called by the name of the river on which the town is located.

Goris was founded in 1870 as the center of Zangezur province of the state Yelizavetpol. It got a status of a town in 1885 by the Russian Empire. The town is situated on a strategically important road Yerevan-Stepanakert.

Dastakert is the smallest town of RA and got a status of a town in 1995.

Sisian is located in the distance of 217km from Yerevan, 6-7km to the south from the highways Yerevan-NKR and Yerevan-Iran, on the two banks of the river Vorotan, 1600m above sea level.

Kajaran is situated on the eastern slope of the mountain range of Zangezur, on the bank of the river Voghji, 200m above sea level. It has been a town since 1958.

Agarak was founded in 1949 as a workman’s settlement. The foundation of the townis tied with the finding and working out some minerals in this area.

Meghri: the industry and especially food industry is developed in the economy of this town. There are many bread, cheese and canning factories here. Meghri is famous for making specific wine as well.

The sites of Syunik region:

Zorats karer (Karahunj) is one of the ancient monumental complexes situated in Syunik region near the town Sisian. It was built in the VI century; it was a sacred place and an observatory. In the most part of the monuments are done holes which correspond to the disposition of stars of that period of time. The ranges of red huge monoliths are seen in the lowland from a long distance, which stretch from the south to the north and the territory, restricted by these ranges, forms an exact circle.

The fortress of Hallidzor was built in the first half of the XVII century as a desert place. Davit Bek reconstructed it to a fortress, which became the main fortress of his war of liberation as the fortress was almost inaccessible. He also made it the center of the Armenian power of Syunik. The fortress is surrounded by a wall which plan has a form of an improper tetragon and the only pyramid with a circular plan is in the south-western corner. There are two entries: the southern and northern. The main building of the complex is the church (it is like a big hall with two pawnshops on the both sides of the vestry) which is adjacent to the double-floor building from the south and north (the ground floors probably had a role of gavits). During the reconstruction of the fortress the roof of the church and two adjacent buildings were leveled in order to fire upon the enemies from there.

Vorotnaberd is located in Tsghuk province of Syunik state of greater Armenia (now near the village Vorotan or Urut), on the right bank of the river Vorotan. 3km to the north-west from Vorotnaberd there is Vorotnavank and the arched bridge built by Melik Tangi in 1855 is in the eastern side of it, on the slope of the citadel, on Vorotan River.

Tatev monastery is a medieval monastic complex 35km to the south from the town Sisian near the village Tatev. It was founded in the IV century. The main Tatev monastery built in 906 (Apostle St. Yevsthaddeus’ vow) was a spiritual-cultural center, a large monastic establishment in the province Tsghukq of Syunik region of Greater Armenia. During the V-VIII centuries it used to be a leading school center, since the end of the VIII century it has been the sitting place of the episcopacy of Syunik. The episcopacy of Tatev used to have 47 own villages. St. Astvatsatsin church of the historical village Tamalek built by the bishop Hakob in the middle of the X century is situated in front of Tatev monastery, on the other side of the gorge. A khachkar of XIII century with the record of the priest Hovhannes is steadfast near the eastern wall.

Devil’s bridge is located over the river Vorortan, east from the village Tatev. It is a natural bridge from travertine with 30m length and 50-60m width. Here is passing the road Goris-Tatev (village). There are many mineral sources in this area creating wonderful spurt-stones. The most part of the sources are just under the bridge and falling into the river Vorotan make it more pouring. The disposition and natural conditions of this area had many strategic meaning during the war of liberation of Syunik leaded by Garegin Hjdeh. From the height of the bridge Njdeh threw the enemies down to the gorge prohibiting them to capture the Armenian historical lands. 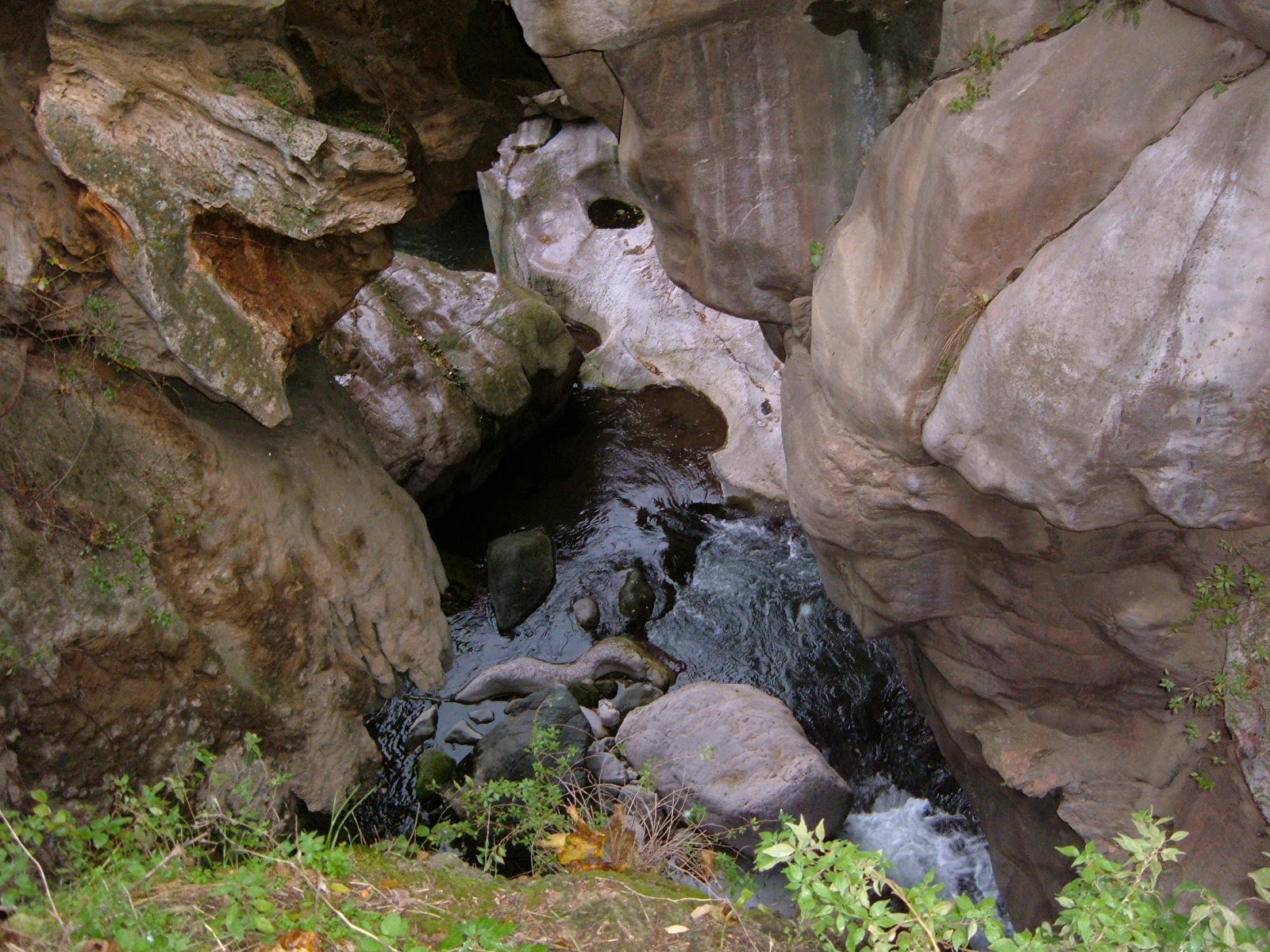 The waterfall of Shaki is located in the gorge of the river Vorotan 3km to the north-west, on Shaki River- the stream of Vorotan. The height is 18m. It was named after a beautiful girl Shaki. According to the legend, a conqueror saw her beauty and fell in love with her and ordered her to represent herself. The Armenian girl unwilling to submit to the violence of the conqueror she fell from the high rock. During the fall her dress was opened by the wind and became a waterfall, which named the waterfall of Shaki. On the slopes of a deep gorge, in the lap of the attractive rocks is situated a huge caved habitat. It is an inexplicable impression when you look at the caves on the inaccessible rocks of Khndzoresk. The cave village stretches about 3km; it used to have 3000 houses and a population of about 15.000. The houses of the village are mostly caved in the rocks. There have been 2 churches and 3 schools here confirming the presence not only of a large population but of a rapid cultural and spiritual life. The tomb of the famous Armenian general Mkhitar Sparapet is located in this gorge.

The village is famous for its many and indescribable self-defensive battles. All the people used to participate in the battles irrespective of age and sex. The caves were connected to each other through secret tunnels but the habitants of the village knew them all. During the attacks the villagers used to move to more inaccessible caves, which were dug under the vertical rocks. Every cave or pathway was built to serve to the purpose with the maximum efficiency. Everybody knew what to do in the presence of the enemy. The habitants could stay besieged as long as needed by regulating the problem of water and food. The enemies used to attack with a numerous and well equipped army, but it was unavailing.