Greece (Greek: Ελλάδα), officially the Hellenic Republic (Ελληνική Δημοκρατία, Ellīnikî Dīmokratía) is a country situated in the South-eastern Europe. The capital and the largest city is Athens (the community of Piraeus is included in the administrative territory of Athens). The country borders with Albania, Macedonia and Bulgaria in the north and with Turkey in the east. The coasts of Greece are washed by the Aegean Sea in the east, by the Ionian Sea in the west and by the Mediterranean Sea in the south. Greece is in the 11th country in the world by the length of its coastline (13,676km) and has a huge number of islands (about 1.400, 227 from which are habited), which are Crete, Dodecanese, Cyclades and the Ionian islands. The 80% of the country′s territory is mountainous and the highest mount is Olympus (2917m).

Modern Greece derives from the civilization of Ancient Greece, which is generally considered to be the cradle of the western civilization. Greece is the home of democracy, western philosophy, Olympic Games, western literature and historiography, political science, the main scientific and mathematical principles and the western drama, including both tragedy and comedy. This legacy is partially reflected in the World Heritage of UNESCO with 17 monuments, taking the 13th place in the list of UNESCO and the 7th place in Europe.

Nowadays Greece was founded in 1830 after the Greek War of Independence. Greece has been a member of European Union since 1981 and a member of Eurozone since 2001. It is also one of the founding members of NATO and UNO.

The Hellenic Republic is divided into 13 administrative regions called “peripheries” (Greek: περιφέρειες), which are divided into 54 “noms” (or prefectures) and the latter in their turn are subdivided into 1038 communities. Completing the list of 13 regions there is the 14th first class administrative unit of Agion Oros (Greek: Άγιον Όρος –the Holly Mountain), which is an autonomous region in the area of the Mount Athos. Greek cuisine is typical to the Mediterranean and Balkan cuisine, but it exceeds the cuisines of its neighbors Bulgaria, Albania and Italy in many terms and especially with the variety of seasonings. Greeks use different kind of seasonings more often than any other nation in Europe, however the Greek cuisine isn’t considered to be spicy.

Another singularity of the Greek cuisine is the amply use of the olive oil.  It is almost added to all dishes and it is used not only as an aromatic spice, but during the thermal processing also. One of the other indispensable ingredients is lemon, but cheese is the pride of the Greek people. There are 50 sorts of cheese produced in Greece (every district has its recipe of cheese making). Greeks are considered to use cheese more than other nations: annually - 25kg per person. The most famous sort of cheese is feta, which is used in the well-known Greek salad. In Greece it is called “horiatiki” (transl. - village salad).

Meat is also very popular in Greece and the preference is given to pork, sheep and goat meat. The most known snacks are pastitsio and moussaka, the latter is made from meat and traditional vegetable. Fish, clams and other seafood are used in Greece as well. 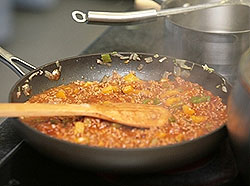 The culture of Greece was formed during several millenniums, starting from the Minoan civilization then it continued in Classical Greece and in Greece of the period of Roman domination. The Ottoman yoke had its influence on the Greek culture, but even in the period of Greek revolution many excellent works of music, literature and painting were created. Orthodox Christianity had a great influence on the modern culture of Greece. Some investigators, for example Robert Kagan, came to a conclusion, that the modern culture of Greece is more tied with the culture of Byzantine and Ottoman Empire than with the one of Ancient Ellada.